It’s been barely open a few months, but Jason Atherton’s Pollen Street Social has already become one of the most touted places to eat in the capital. Word has it that more than 5000 Londoners bombarded the phonelines of the former Gordon Ramsay protégé’s newest venture the day they started taking reservations to get a ticket to the sequel of the much-acclaimed Maze which Atherton ran for Ramsay Holdings up till 2010. And though the craze has somewhat died down now, its still at least a 4 week waiting period to get a dinner table for 2 for prime time on a Saturday evening at the Social. 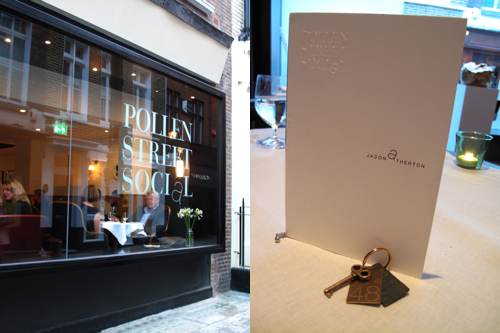 In contrast to the narrow lane just off Hanover Square which is Pollen Street, the Social is surprisingly spacious inside… a buzzy tapas bar-cum-lounge area opens up seamlessly into the elegant and expansive dining and dessert bar areas. You can tell a lot of thought has gone into creating the laid-back yet cosmopolitan feel to the place. The front of house team is assured, attentive and eager to please. And everything from the slick Scandinavian furniture to the rustic filament-bulb lighting works wonders to create that casual fine-dining air without any of the stiffness that can sometimes accompany it. There’s no fuss around tasting menus or number of courses either. Order whatever and however as you please from the smaller, tapas-style starters (£9.50 – £11.50) or the more substantial main courses (most priced between £21-£25).

Food-wise, Atherton’s cuisine is accomplished and inventive, with streaks of flair and playful ingenuity throughout. Yes, there are no doubt some similarities to the Modern European-Asian fusion cuisine which he made a name for at Maze, but Atherton does seem to have taken on a more modernist, Blumenthal-esque style to his food here. There is a slant somewhat towards Spanish elements with Chorizo, Paella, Gazpacho and Rice Pudding featuring throughout the concise but varied menu… no doubt the influence of his younger days training at El Bulli under Ferran Adria.

Not long after Jo and myself ordered (3 starters to share and a main course each), some freshly baked sourdough soon arrived. The pièce de résistance though was not the bread itself, but the paddle of unsalted butter and delicious bowl of Salt Cod puree which it came with. Initially, I was so hooked on the savoury, depth of flavour of the salt cod puree that I ended up neglecting the butter completely. However, after some insistence from the better half to try the butter, I could see what she was on about. Delicate and velvety with a farm-fresh, milky taste, its probably the best butter I’ve ever tasted.

The first of the starters we dived into was the much-praised Full English Breakfast. An uncanny reconstruction of the good ‘ol fry-up, it’s quite simply brilliant if you ask me. Take the memories of every good poached egg with dripping toast you’ve ever had… every strip of perfectly cooked streaky bacon… sweet, slow-roasted tomatoes and earthy mushrooms…. all compacted and molecularised into this one single plate of perfection. Yes, portion-wise its tiny… those little croutons aren’t exactly full-sized pieces of toast and after you reluctantly break the yolk of the slow-cooked 65° egg, its all over in 3 or 4 mouthfuls. But its 3 or 4 mouthfuls that will undoubtedly bring a smile to your face. Unmissable. 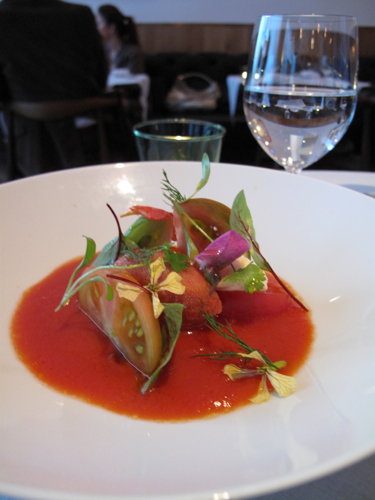 The Heritage Tomato Salad with Burrata cheese was again an ingenious deconstruction of the Tomato-based Gazpacho which it sat on top of. You will be subject to an extraordinary, roller-coaster ride of flavours as the initial sweetness of the plump tomatoes and creamy burrata give way to the explosive plunge of flavour from the vanilla-spiked gazpacho and ice-cold tomato sorbet. Dee-licious. 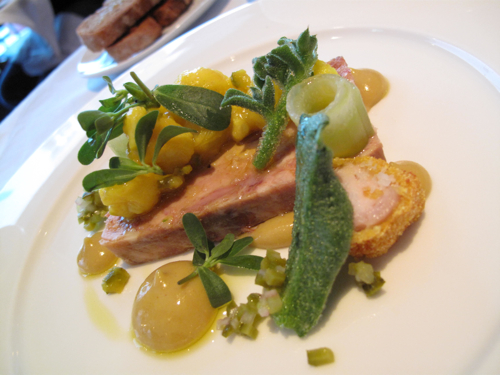 Though somewhat less mindblowing than the earlier 2 dishes, the tete de porc continued to tease the tastebuds with different textures and big, full-on flavours. The gelatinous bite of the Pig’s Head terrine was complemented beautifully by the mustard gel. The tangy piccallilli and crunchy nuggets of rabbit-foie gras brought an entourage of different tastes and textures to the party. Best of all, it was a good portion size to make up the slack of the previous dishes.

Their main courses, though simpler and more down to earth are a reminder that although there are plenty of playful dishes on the menu, the kitchen is very well capable of seriously good technical cooking. Jo’s slow-braised Ox-Cheeks with slices of Tongue and Sirloin, were a melt-in-the-mouth, carnivorous explosion of cow. Equally as accomplished was my Hake dish which was topped off with an air-light, yet wonderfully tasty Razor Clam and Cockle emulsion foam. Although each mouthful of the foam was like eating a joyful breath of sea-breeze, my only gripe with it was that it was horribly difficult to actually see what it was I was eating which was a bit of a shame.

With our tummies bursting by now, we started to regret not leaving enough room to order a selection of puds from the much talked about dessert bar. After much deliberation, we opted for the “PBJ” to share – a psychedelic combination of parfait, crushed peanuts, cherry sorbet, jam and every child’s once-upon-a-time love… fruit roll-ups!!! A ingenious interpretation of the legendary peanut-butter & jelly sandwich… it’s hard not to feel like a six-year old child at the sweet-shop with this pud.

Damage for the night came up to just over £60 a head including a very decent glass of wine for me and a not-very-decent at-all Social Rum Punch for Jo which tasted of rum, ice and not much else (the only bummer to an otherwise quite perfect evening). However, any negative thoughts were very quickly banished when we handed the mysterious key back to the front of house staff on our way out… 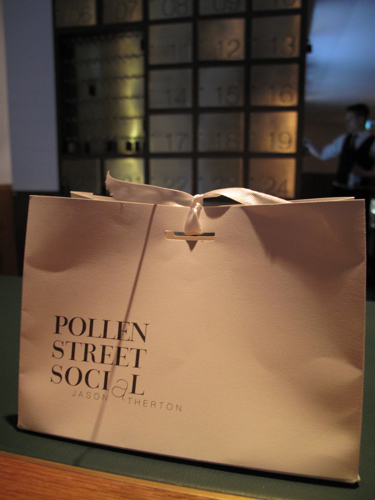 A lovely touch, and I won’t ruin the surprise for you as to what’s in the bag. All in all, a stonkingly good evening on the whole that left us smiling for hours on end after the meal. It’s only a matter of time before that 1st Michelin star beckons if you ask me.

One thought on “Pollen Street Social”