Out of all of Penang’s countless street food dishes, few require more skill and technique than a plate of Char Koay Teow. I love the stories and idiosyncracies behind each plate of this iconic, wok-fried noodle dish. Tune into local Penangite hawker gossip and you are bound to hear rumours and whisperings with an uncanny level of detail: which old uncle or aunty is retiring soon… what their secret ingredients are… whether the new son-in-law is a worthy successor or not. Stalls often have very specific opening hours and off days. Some cater to the breakfast and lunch crowds. Others trade in the evenings only for dinner and late night supper. 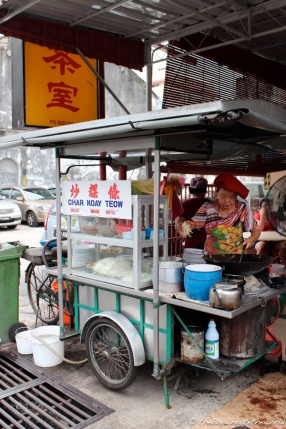 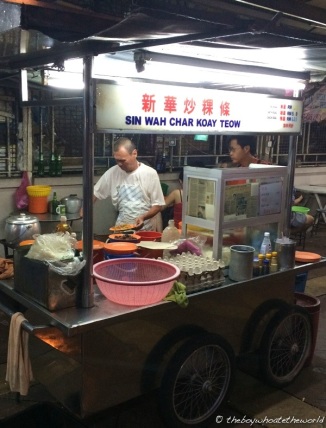 A good recipe alone is not enough. It’s all about the art of imparting ‘wok hei‘ – that beautiful smoky, caramelised ‘wok’s breath’ flavour – into the dish. The best ones tend to be those which are cooked individually to order, preferably over hot coals to achieve maximum wok hei. Flavour-wise, there should be a good balance between savoury, sweet and spicy – the stir-fried sauce base a mixture of freshly ground chilli paste and soya sauce laced with sugar. 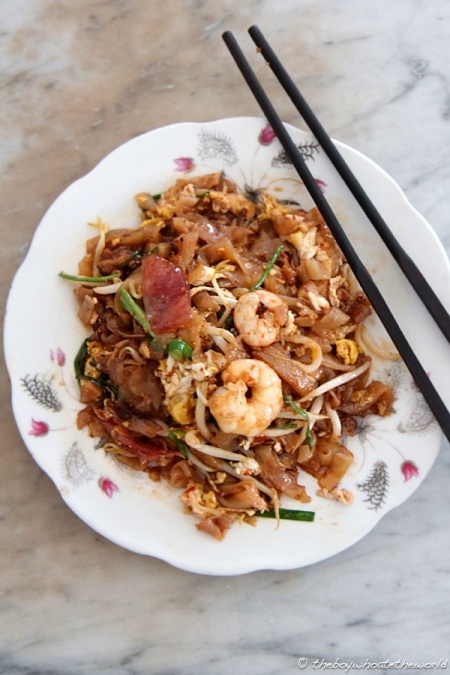 In curating this histlist, we hit up some of Penang’s most famous kopitiams and street vendors on our recent trip. 8 stalls, 72 hours (and 5000+ calories later…) it gives me great pleasure to share with you my shorlist (and winner) of the best Char Koay Teow in Penang.

It’s impossible to miss the infamously feisty Char Koay Teow lady parked out in front of Heng Huat Café, donned in her red Parisian painter’s hat. Note your table number first before ordering and try not to disturb her while she’s in the midst of creating one of her works of art. In the few interspersed seconds she isn’t wok-frying something, be prepared for a barrage of tantrum-filled Hokkien words directed at both co-workers and customers alike. Also, at RM10 for a medium-sized plate these days, it is without question one of the most exorbitant plates of hawker food you will find yourself paying for anywhere in Malaysia. 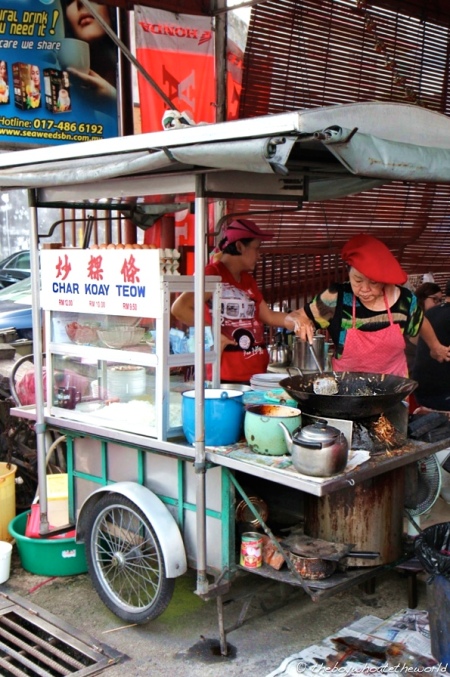 Why do people still put up with the rudeness and prices you ask? For starters, instead of the usual measley shrimp you get on your average plate of CKT, your 10 hard-earned ringgits go towards the cost of three MAHOOSIVE king prawns. If you aren’t all prawned out, an additional RM2 for the large-sized plate buys you a couple more of the giant crustacea. 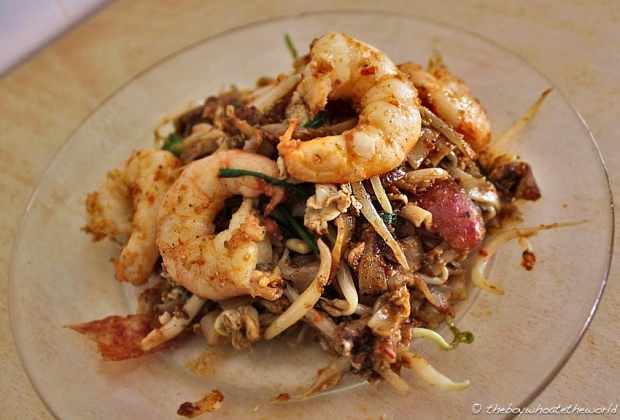 The distraction of the prawns aside, there’s an unmistakable wok hei aroma in each plate Madame Lorong Selamat sends out – a testament to her small-batch frying technique, use of hot coals to turbo-charge her gas-stove and LOADS of pork lard. Yes, a plate of CKT here is undoubtedly a little greasier relative to other stalls. But the full-on flavours and theatre here will always be a hit with the Char Koay Teow chasing crowds. Go early or slightly later in the afternoon to avoid the lunch crowd. The wait time can be anywhere between 30 to 45 minutes otherwise!

The original sisters who once ran this iconic stall have long since passed the reins over to their younger family members. Thankfully, standards remain high under the stewardship of the next generation. I’ve been coming to get my CKT breakfast fix here ever since my childhood days and it still tastes as good as it does today as it did when the sisters themselves were at the helm. 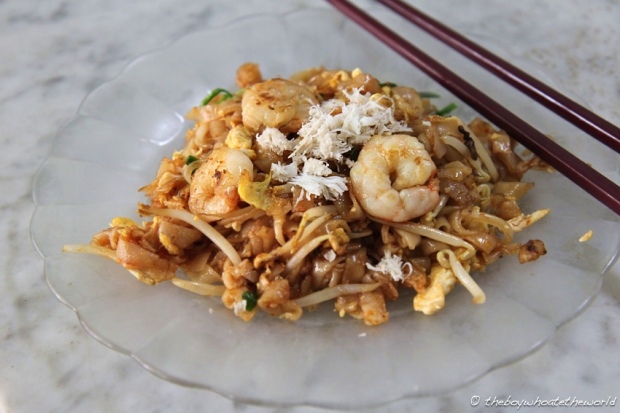 At RM6 for the medium-sized plate, the portion is a tad small. But boy are the flavours well balanced. It’s incredibly moreish without being overly salty or greasy as CKT can so often be. There’s a great kick from the freshly ground chilli paste. Then comes the burst of goodness from the bits of crunchy, deep-fried pork lard. What really sets a plate of Sisters’ Char Koay Teow apart from its peers though is the sweetness from the freshly picked crab meat on top. It’s the icing on the cake.

There are a couple branches of the “Famous Ah Leng Char Koay Teow” franchise in Penang. Ah Leng’s children run the one we visited in town, located at Tong Hooi Café on Dato Keramat Road. I hear the man himself (‘Ah Leng’) cooks the evening shift (5pm – 11pm) at their Ayer Itam outpost on Zoo Road.

A regular sized plate here costs RM 7.50 and comes with 2 large prawns. If you fancy yourself some ginormous mantis prawns, you can go for their ‘special’ plate, which will set you back an additional RM5. I say stick to the regular – the big prawns so often distract from the rest of the dish. Do however opt for Duck Egg upgrade here – it costs an extra 50 cents, but the creaminess of the duck yolks don’t lie. 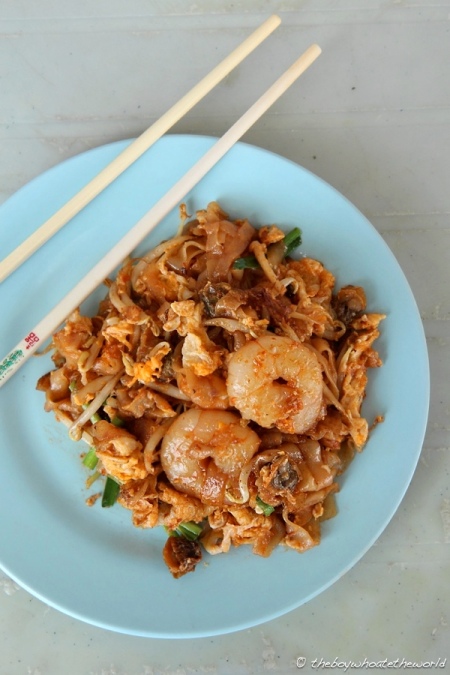 Flavourwise, there’s a great kick of spice. I found it slightly sweeter than the average CKT, but the savoury depth of flavour is just spot on, providing balance to the sweetness. All plates were fried individually, giving rise to that smoky, irreplaceable ‘wok hei’ aroma. Despite each plate being cooked to order, we were served in under 15 minutes of ordering when we visited mid-morning. I imagine it gets much busier during lunchtime so I’d suggest going early unless you don’t mind a longer wait.

Local Penangites I’ve spoken to claim the patriarch’s version in Ayer Itam has the edge over the one in town (I promise to report back on my next trip once I’ve tried it). If the plate I had by Ah Leng’s children is anything to go by, I’d say the family business is in good hands for many years to come.

Meet the Old Uncle of Siam Road, widely regarded as Penang’s Char Koay Teow King. His palace: an unsigned pushcart that he cooks out of on the corner of Siam Road and Anson Road (update June 2018: I hear the old uncle has since moved into a new coffee shop on Siam Road here so he no longer cooks on the roadside!). 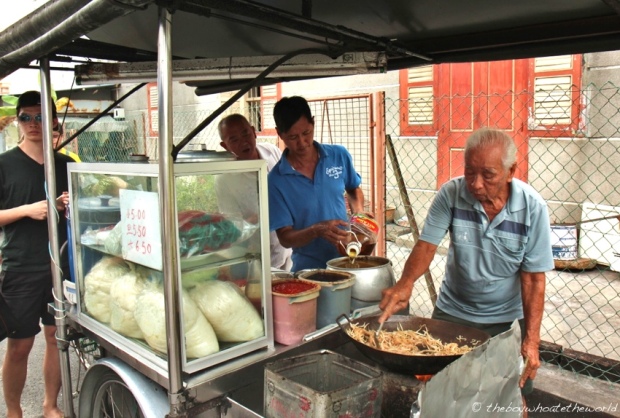 We turned up 15 minutes before opening time and an entire coffee shop was already packed to the rafters waiting for his arrival. Nervous looks are exchanged when the clock strikes 3pm and there’s still no sign of the king. Moments later, the old uncle turns up on foot with his pushcart.

Like clockwork, an ensemble of deliveries soon arrive by motorcycle to deliver the afternoon’s supplies. First comes the charcoal man. Next, stacks and stacks of eggs. Then comes the seafood – cockles and prawns, packed in ice boxes. A big sack of plump beansprouts soon follow. Finally the silky smooth Koay Teow. There isn’t exactly a queuing system in the coffee shop so there’s a frantic scramble to place orders with his assistant as he fires up his wok.

Watching the old uncle at work is witnessing an artisan at the very pinnacle of his craft. There’s an effortless efficiency in his style. A gentle wave of his old-school palm leaf fan keeps the hot coals blazing. In go the ingredients in quick succession – the oil and pork lard first. Then the prawns, noodles, beansprouts, egg and sauces. A few quick flicks of the spatula stir everything together and ensure even cooking. Then it’s in with the final condiments – cockles, chives and chinese sausage slices to finish. 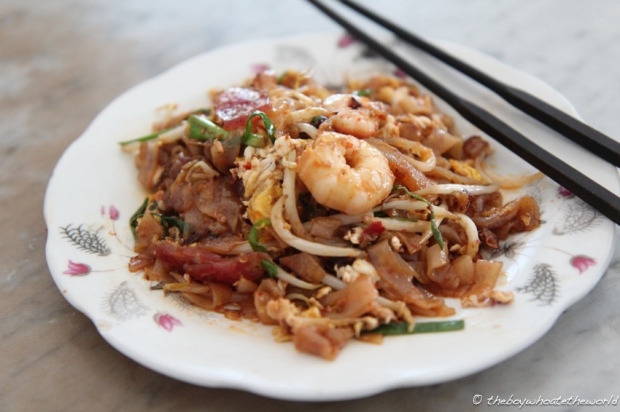 This is as good as Char Koay Teow gets. The rice noodles are silky smooth. The beansprouts are plump. The cockles, large and juicy. The seasoning, sweetness and spice levels are beautifully balanced. The smoky wok hei aroma is intense throughout, each bomb of crispy pork lard adding layer after layer of flavour. There are no monster-sized prawns to hide behind or detract from the dish here. Just Char Koay Teow perfection at a very reasonable RM5.50 a plate.

The bad news? Brace yourselves for a very VERY long wait. Frying each plate individually to order takes time, and the wait can be over an hour when the stall is at its busiest during weekends. Going early doesn’t necessarily guarantee a shorter wait either given the lack of a proper queue. My wait was under 20 minutes as I was part of the first batch of orders after opening, but depending on your luck of the draw, I imagine you could be waiting for up to 45 minutes even if you go early before opening time.

Head elsewhere if you are in a rush. But if you have time on your hands and the patience to wait it out, this for me is Penang’s best Char Koay Teow, hands down.

p.s. Don’t see your favourite Char Koay Teow stall on this shortlist? I’d love to hear from you to hunt it down on my next trip to Penang!