Wheelers Oyster Bar: Head over Wheelers in Seafood at Whitstable

As far as British sea-side towns go, few evoke more charm and heritage than Whitstable. There’s the old harbour, still lined with fishing boats from another era… There’s the narrow alleyways and rolling green slopes, all of which lead straight down towards the pebble rock beach… There’s the bustling High Street, with the quaintest of independent shops (even the local off license has the look of a boutique wine merchant)… And of course, there’s the dreamy, idyllic kaleidoscope of beach huts that line the coast. Somehow against all odds, even while it was tipping it down with rain all over the rest of the UK a couple of weekends ago, the sun continued to shine on this magical slice of Kentish coastline.

No trip to Whitstable would be complete without a visit to that little pink oyster bar that’s almost as big an institution as the town itself. With only a limited number of seats by the bar and a modest dining room that barely fits 14 covers in the back, it’s no wonder getting a weekend  table at Wheelers has become a real quest unless you book weeks in advance. Thankfully, Mondays are a lot less busy. So if you’re ever in need of an excuse to skip the Sunday blues and extend your weekend in Whitstable, there’s no better reason than a long, leisurely Monday lunch at this retro seafood mecca. 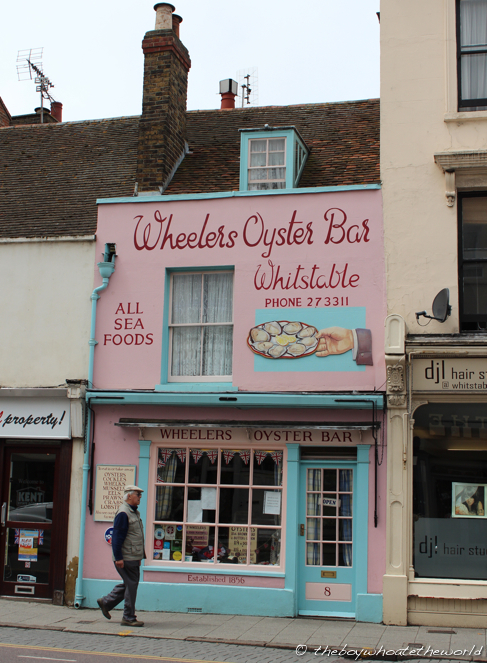 We started with a selection of goodies from the cold bar: 4 stonkingly large King Prawns… a pint of Shrimp… whelks… cockles…  and a helping of freshly picked crab meat. No nonsense or messing around here. Just top notch seafood straight off the boat, served with some brown bread and a good wedge of lemon on the side. The King Prawns were particularly good – some of the freshest and juiciest I’ve had in a while. I really enjoyed the smaller shrimp as well – their flesh was delectably sweet and the shells soft enough to devour whole for those lazy to peel. 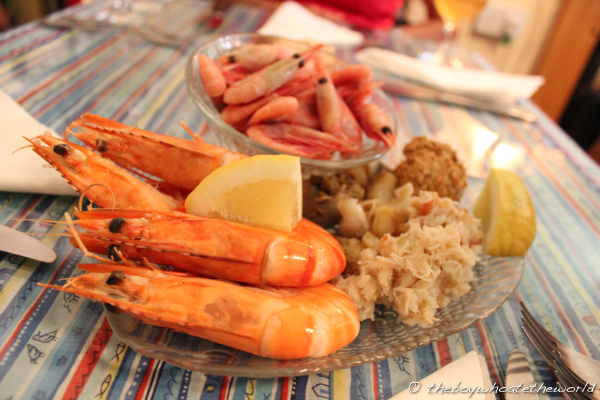 What’s a visit to Wheelers if you don’t have Oysters. And having already had plenty of the au naturale variety by the harbour over the previous 2 days, we opted for the Oysters ‘Kilpatrick’ for a change of scene. The raw, meaty Oysters were a fresh taste of the seaside and the hot bacon lardons added a good depth of flavour. However, I felt they went a little OTT with the Worcestershire… a couple of them were literally swimming in sauce, stealing the thunder from the natural flavour of the oysters themselves.

But if you thought Wheelers was all about its cold seafood bar alone, you wouldn’t be doing the chefs working away in the back kitchens any justice. Despite a teeny-tiny kitchen that’s all but 4 feet wide, the standard of the dishes being churned out are Michelin-star worthy. Our Spider crab dish was an explosion of fresh, beautifully balanced flavours. The Tian of freshly picked crab, avocado and cucumber was sweet, meaty yet soothing. But before you can say or think mmmMMMMMmm, you get one heck of a refreshing burst from the ice-cold grapefruit granita… then the tangy-sweet citrus flavours from the mango and lime dressing kick in. You’ve got to love the gorgeous plating as well.

And just when we thought it couldn’t get any better, out came the pièce de resistance…

Their Lobster ‘Lasagna’ was a glorious 95% Lobster : 5% Pasta. Yes, there’s one ENTIRE lobster underneath it all =D. The silky pasta, comforting crab & leek ragout and earthiness of the wild mushrooms were all great. But what really blew my mind was the depth and body of the shellfish bisque… a creamy, concentrated soup of loveliness packed with the sweetness of a thousand of prawn heads. A stunner of a dish and probably the most awesome celebration of the lobster you will find anywhere.

And if you thought Wheelers was a one trick pony only capable of seafood dishes, how’s this for an utterly perfect, textbook Raspberry souffle…

Served piping hot with a shot glass of a Raspberry-Eton Mess crossbreed and a scoop of the juiciest sorbet, it was a heavenly pud to cap a truly fabulous lunch.

Easily one of the best, if not the best seafood meal I’ve had anywhere in the country. It’s no surprise the elderly couple lunching beside us declared Wheelers their favourite restaurant in the whole wide world.

The saving up for one of those dreamy beach huts begins today.

p.s. Don’t forget to BYO booze as they don’t have an alcohol license. There’s hardly any shortage of wines and local Kentish ales in the off license just across the street though…

← Dalla Terra: the return of the Enoteca
Shrimpy’s: Skimpy, underwhelming food that’s far too dear for what it is →

6 thoughts on “Wheelers Oyster Bar: Head over Wheelers in Seafood at Whitstable”