The Pig, Brockenhurst: from kitchen garden and the surrounding New Forest straight to your plate

Set in the heart of the New Forest, The Pig is a gorgeous country house hotel and restaurant that prides itself on serving up produce that comes straight from its very own grounds. With its very own kitchen garden, greenhouse, orchard, chicken coop and smokehouse on-site, the concept of sourcing produce locally is taken to a whole new level here at The Pig. A group of fellow bloggers and myself were lucky enough to be recently invited for lunch and a tour of their premises to experience the unique ethos and micro-seasonal food here. 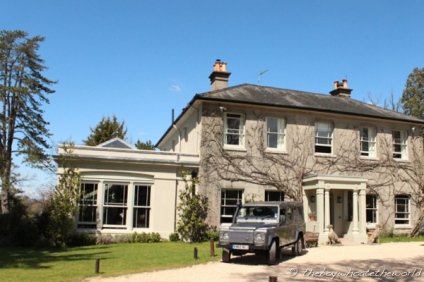 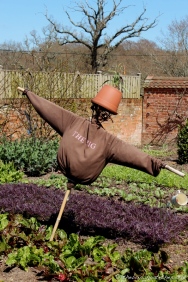 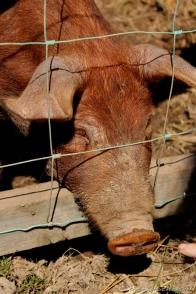 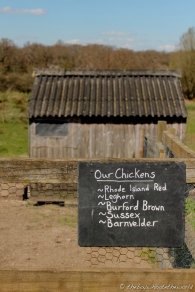 The Pig in the New Forest

In a world of supermarket giants and plastic packaging, just seeing the passion of head chef James Golding and his colleagues foraging for produce in their backyard and tending to their livestock was a breath of fresh air. The everchanging menu of simple, uncomplicated British ‘garden’ food is completely driven by what James and his team of garderners and foragers deem to be in their prime. What they don’t grow or rear in their grounds is sourced locally from artisan suppliers in the surrounding New Forest. Meats come from T Bartlett & Sons, a 3 generations old family butcher based down the road in New Milton. Honey comes from local beekeeper Howat’s Hives. Even seafood comes from nearby Lymington. In fact, everything on their ’25 mile menu’ comes from suppliers within a 25 mile radius of the property. It doesn’t get much more local than that.

Before you embark on your meal, take some time out to sink into their comfy sofas at the bar and indulge in an expertly made cocktail or three, shaken up with one of their unique home-infused liquors. There’s all sorts of interesting and wacky flavours from kaffir lime infusions to bog myrtle(!?) vodka even. 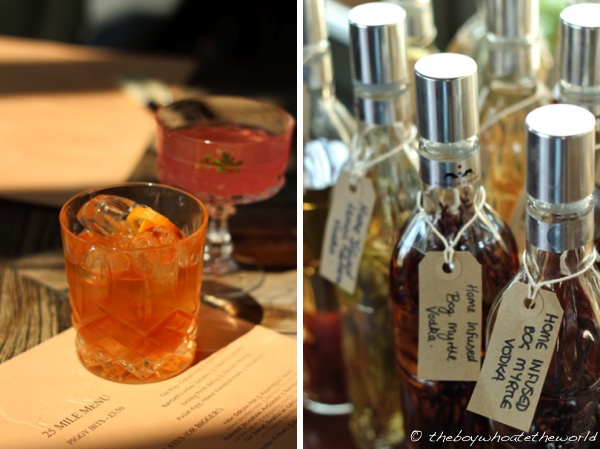 The quaint and chic dining room – a glassy, greenhouse-like conservatory with floor-to-roof windows – was bathed in buckets of early summer sunshine. Vines and potted herbs lined the walls alongside vintage porcelain and watercolour paintings. It’s an eclectic yet wonderfully snug room that easily puts other British country hotel dining rooms to shame. And despite it being a midweek afternoon, the rustic wooden tables and chairs were already packed and abuzz with happy guests tucking into their lunch by the time we got there.

We kicked off lunch with a selection of their ‘Piggy bits’ to bite at. Pork crackling, served with apple compote was crunchy and well-seasoned. Even more addictive and moreish were the crispy belly pork pieces, roasted in a subtly spiced honey. Best of the lot though were the Brock eggs. Think a quail’s egg (fresh from their own coops)… the yolk still luscious and runny… the stuffing overflowing with ham hock… all packaged in a crisp, golden-brown, breadcrumbed shell. It’s a little scotch egg on steroids that will leave you wanting more. 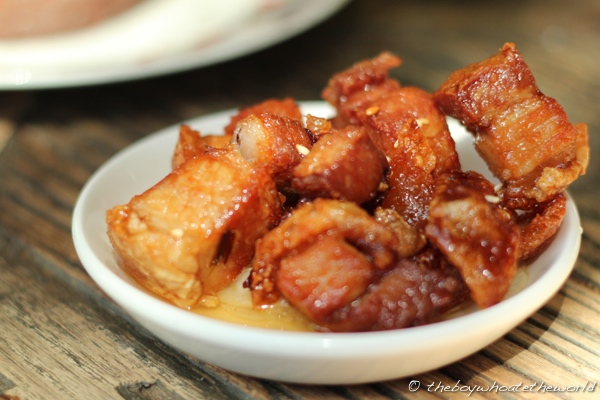 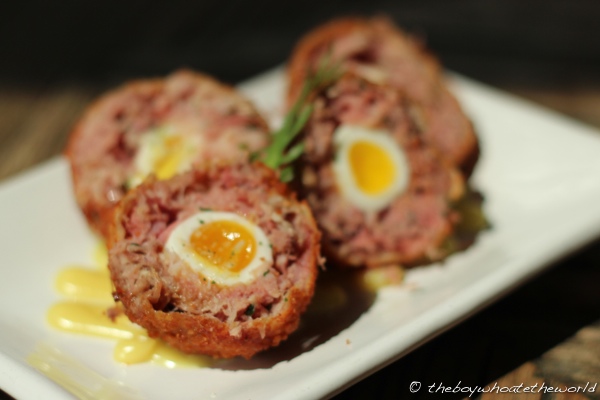 Starters were beautifully presented, the majority on rustic wooden boards. The Meat Board by local curing company ‘A Pinch of Salt’ was a real showcase of local Hampshire produce… bresaola… prosciutto… lardo… who needs Europe? But if what you are after is a dish where every single element comes from the immediate surroundings, look no further than the home-smoked Glenarm salmon. Infused with a blend of New Forest oak, local honey and sea salt, each bite of the velvety, thick-cut slabs released layer after layer of flavour. I really enjoyed the tangy pickled cucumber and watercress salad on the side as well. Again, every leaf and slice of fruit was taken straight from their kitchen garden. 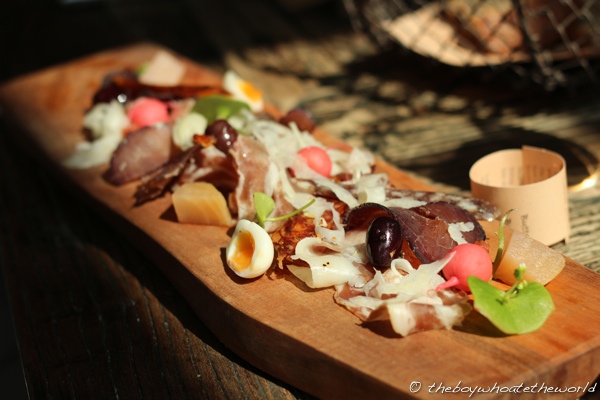 Cured Hampshire Meat Board by ‘A Pinch of Salt’ 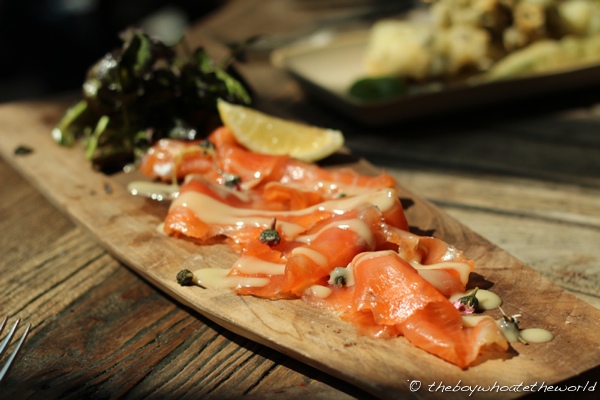 The fresh, bold flavours continued into the main courses. Bloggers being bloggers, we weren’t shy about sharing and tucking into one another’s food to try out the full spread on offer. Black Pudding hash, topped with still-runny sunny-side-ups was some proper comfort food. The black pudding was full on flavour but not overpowering thanks to a zingy apple and cress salad that helped to cut through the richness. My neighbour’s fennel roasted pork fillet was just as enticing – the meat, succulent… the herb crust, fragrant and aromatic… all topped off with a tasty and well-balanced mustard sauce.

But all eyes were on the signature ‘Bath Chap’ which fellow blogger A ordered. And quite the extraordinary sight it was. For the uninitiated, it’s quite literally the entire side of a Pig’s head… skull, teeth and the all-important cheeks still intact! And boy do they roast the chap to perfection here. The cheek meat was melt-in-the-mouth tender and the crackling, albeit a tad salty was one of the most crunchy and scrumptious I’ve ever tasted. 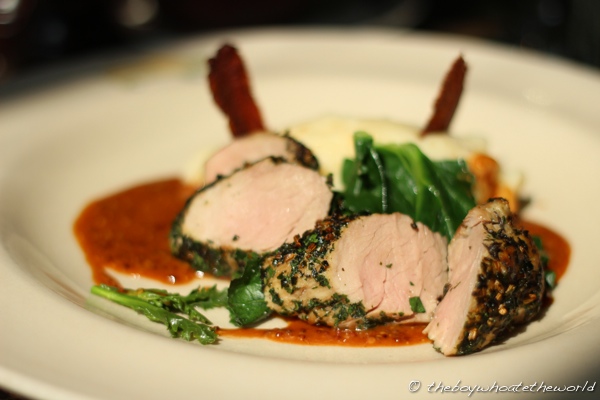 If you anticipate being too full to roll home after your meal here, book ahead and check yourself into one of their 26 bedrooms across the main house or the recently converted stable yards – all gorgeously chic yet cozy. Alternatively, you can also hole up in their new sister property in central Southhampton, the 12 bedroom Pig in the Wall which we stopped by at for a spot of tea at on our way back to London. Located a 20 minute drive from Brockenhurst, the rooms have the same snug interiors of the main hotel and there’s a complimentary shuttle service provided between the two properties for those looking to dine at the restaurant. 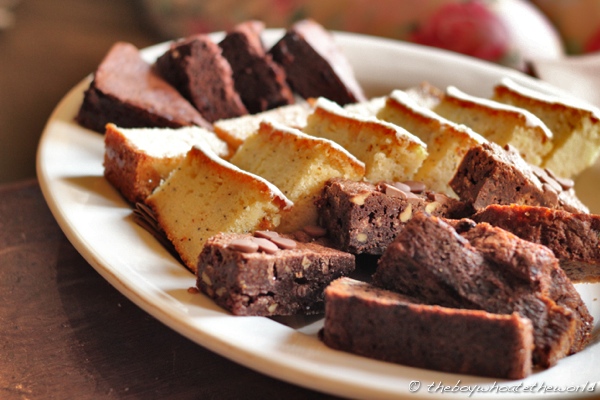 Tea time at The Pig in the Wall, Southhampton

The freshness of the food and practically zero food miles in getting the produce from source to plate here doesn’t lie. It’s no wonder The Pig’s dining room is full even on a Tuesday afternoon. A truly fabulous meal and day out in what is easily one of the most chic yet cozy country houses in all of Britain. A must on any New Forest itinerary.

4 thoughts on “The Pig, Brockenhurst: from kitchen garden and the surrounding New Forest straight to your plate”