Dinner by Heston: Blumenthal’s London outpost lives up to the hype

Over the past few years, I’ve spent many a morning trying The Fat Duck‘s reservations line, only to be told by that same (now slightly annoying) auto-generated female voice that that the weekend table I was after for 2 months in advance was now fully booked. Accepting that some things are not always meant to be, I’ve since settled for the next best thing for now…. a meal at Blumenthal’s London outpost, Dinner by Heston.

The Philosophy at Dinner is all about the history of British cuisine. Heston and right-hand man Ashley Palmer-Watts who runs point here have seemingly trawled through every British cookery book from the Middle Ages to the Victorian era to craft a menu that uses the modern, molecular techniques that Blumenthal has become renowned for to bring age-old British classics back to life.

One year on from it’s opening, though the hype has somewhat died down, getting a dinner table here still isn’t easy. Unless you’re on the prowl as soon as their online reservation system opens (on the 1st day of each month for a spot on the following month’s diary), you will find yourself settling for the last remaining early-bird or late-night seatings.

Given this place has been written about and blogged to the death already, rather than give you a blow-by-blow account of every dish, I’ll keep things short and instead let the photography take you on the journey through the ages of culinary Britain, rounding up with some after-thoughts on the evening’s highlights (as well as it’s mediocrities) towards the end. 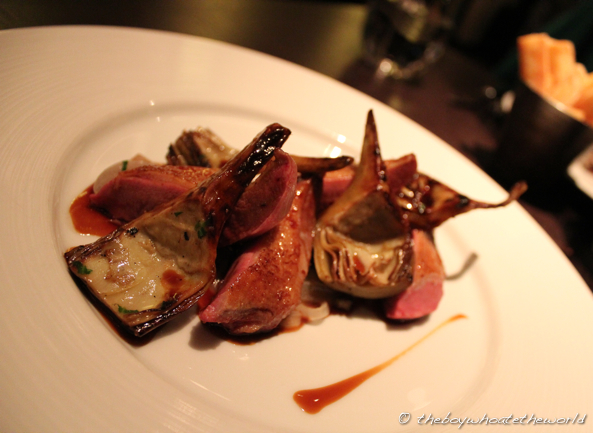 The Meat Fruit: Yes, if there’s one dish that’s become more famous than the establishment itself, it’s the much-acclaimed Meat fruit. And despite how much it’s been raved, touted and shouted about, it was still quite simply the best dish of the evening. The optical illusion of the fruit is uncanny…. down to the little pores of the delectable Mandarin jelly skin. And inside, what awaits is a Chicken Liver Parfait that’s as smooth as a baby’s bottom. It’s delectable. It’s ingenious. And this dish alone is probably reason enough to visit (and revisit…).

The Service: The front of house team here will charm your socks off. Service is attentive and sharp. Every single one of the waiting staff, from the receptionist to the sommelier have a way about them that will keep things incredibly relaxed, friendly and informal despite the setting and occasion. Plates of food will transition seamlessly form one course to another and no glass will go empty. Nothing like the stiff, often personaility-less silver service you get at other hotel-restaurants.

The seriously, well-executed food: The cooking here for the most part is flawless and you will get a relentless dose of Blumenthal’s trademark technical flair and anal attention to detail. Inside the glass-box of a kitchen is a huge team of chefs under the watchful eye of Ashley Palmer-Watt that embody the Blumenthal philosophy, working away gracefully and seemingly effortlessly at their various specialist stations. What results is food which is surprisingly unpretentious that delivers on every level from presentation to portion-sizing to taste. The Main courses were especially brilliant. No gimmicks or optical illusions here. Just a stonkingly well-cooked Pork Chop on the bone that tasted a bit like Chinese BBQ Pork (only on steroids) and beautifully pink and tender Pigeon… subtly spiced with a rich, background kick from the Ale sauce.

And now onto the not-so-highs….

The Taffety Tart: Despite it’s drop dead gorgeous looks and multi-faceted textures, I found the tartness of the blackcurrant sorbet incredibly overwhelming… the sourness swamping the more subtle, sweet flavours of the apple and rose which became innocent bystanders. Disappointing.

There’s no escaping that Hotel-restaurant feeling… : Despite how lovely the open plan dining room is with views over Hyde Park given the Madarin Oriental’s prime location, I still (and always will) get that sterile feeling of having to walk through the hotel entrance, followed by lobby reception before getting to the restaurant. Also, given the restaurant doesn’t have adjoining bathrooms of it’s own, having to navigate out of the dining room and through the maze of corridors in the basement just for a pee doesn’t make for fun and games. 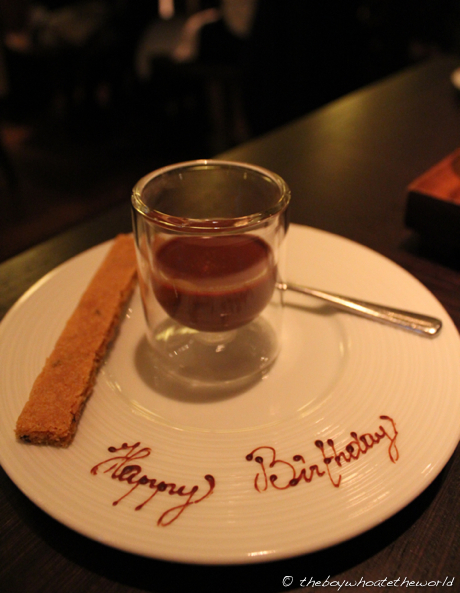 Earl Grey and Chocolate ganache (compliments of the house)

Dinner for 2, including a couple glasses of wine came up to just under £180. Yes, it’s by no means cheap… but Taffety Tart bum-note aside, it was a truly outstanding meal on the whole and a worthy dinner to usher in the wrong side of my mid-twenties.

Bring on the Fat Duck. I will continue to stalk their new online reservations system until I get that coveted weekend table…

11 thoughts on “Dinner by Heston: Blumenthal’s London outpost lives up to the hype”