So there we were at supposedly one of Manchester’s best restaurants – 1 Michelin star with the Michael Caines seal of approval, waiting patiently by the “please wait to be seated” counter to be seated. You would have thought the sensible thing to do would be to man the counter. 5 minutes later though and still no-one in sight to greet us, we got impatient and walked straight into the centre of the dining room to introduce ourselves. To add insult to injury, the front of house then sat us down at probably the worst table in the house, just beside the swinging doors of the piercing-flourescent-lit kitchen. With the dining room rather dimly lit, every time a waiter stormed in and out through the doors of the kitchen, it was like death by strobe lighting. 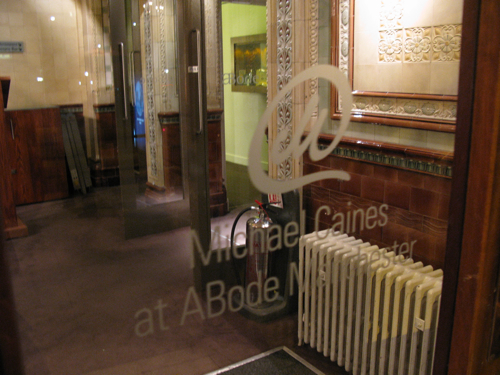 All would have been forgiven if the rest of the evening got back on track, but this comedy of errors was just in it’s opening act. Having taken our food orders, the waitress soon returned and managed to spill a big gulp of wine all over the table. After apologising, she then asked if she could help us to any still or sparkling water. She must have had the memory of a goldfish as I had specifically asked her for some good ol’ Mancunian tap water just 3 minutes ago. At this point, with my head already shaking at the clumsiness of it all, it was difficult not to be distracted by the chaos around us – waiting staff charging around the dining room with no rhyme or reason. At one point, 5 of them stood round one of the managers by the terminals for a briefing for all to see.

I could rant about the shabby service all day, so lets move on instead to the food. In addition to the standard A la Carte Menu, you can choose from a selection of smaller-sized “Grazing” dishes. Afraid that grazing alone would leave us still hungry by the end of the night, we grazed thru 3 starters, and ordered a full-size main each. 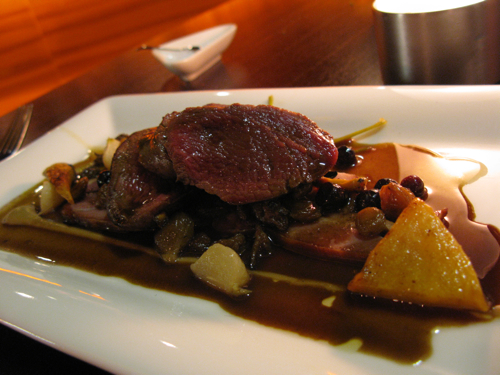 To be fair, Caines and Head Chef Ian Matfin have created a menu of inventive and tasty combinations which aim to showcase the quality of British produce. There is one very serious problem with it all though. All the food is stone-cold (and i do mean ALL of it). Served barely luke-warm, as delicious as some of the food was, by the time you get to the third bite, it’s hard not to succumb to the involuntary gag. I was told frankly by the Maitre-D that that’s the way things are here so one can “better appreciate the taste of the food”. Somehow though I doubt we were the first ones to complain as he seemed to appreciate that the luke-warmness wasn’t everyone’s cup of tea. Coldness aside though, the first few bites of the Venison (before it went cold that is…) was stonkingly good. Packed with bounds of gamey, smoky flavour, the saddle was left wonderfully rare and perfectly accompanied with the sweet chestnut puree and bold red wine and currant sauce. A generously sized main that was the highlight of an otherwise disastrous night.

The irony of it all was that when it came to dessert, our cold Apple parfait and gingerbread ice-cream began to melt even before we took our first bite. Un-firetrucking-believable…

On the whole, an utterly disappointing meal especially given the reputation and hype around Michael Caines and his double-starred Gidleigh Park. When I pay good money for haute cuisine (just over £140 for 2 including a half bottle of wine), I expect to be wined and dined like a spoilt brat. Cold food and shoddy service just isn’t quite good enough.