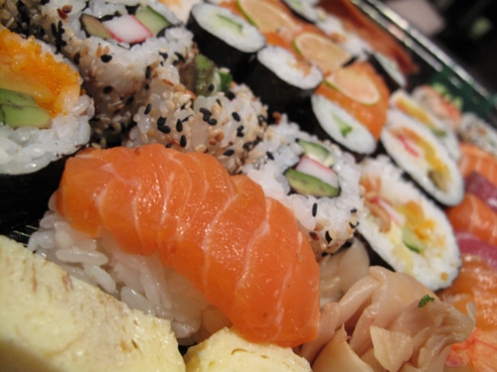 Word has it that the traditional Japanese Sushi chefs of old would have spent a total of 5 years in their younger days training as apprentices. In fact, most of the old guard would not have touched a fish until their third year of the apprenticeship. Crazy as it sounds, the first two years would have been spent solely on prepping sushi rice alone – washing the grains… using the exact amount of cooking water… willing the grains to absorb the rice vinegar with circular, swiping motions. Only then would one progress onto the meticulous preparation of fillings, the privilege of slicing sashimi-grade fish and finally, the opportunity to master the multitude of forms this hidden art takes … The Nigri, The Maki and The Gunkan to name a few. There were no certificates or qualifications handed out back in the day – just one’s word of honour of having done the time. But this is what you would come to expect of this fascinating culture where discipline and perseverance rule above all. This is Narihito Matsunaga’s story – and if you don’t have 5 years to spare, you can learn a heck of a lot from him and his wife Yoshie by spending a Sunday afternoon in their company.

Nari and Yoshie run a sushi school out of their home in Golders Green, catering for both private courses as well as group courses. After robing up in traditional aprons and Japanese slippers, the fun and games began. In the 4 hour apprenticeship you will cover basics such as making wasabi and yielding the perfect sushi rice to the more intricate techniques like slicing sashimi and rolling UraMaki (inside out sushi).The produce is fresh, sourced from whole-saler Atariya who supply many of London’s best Japanese restaurants and the course is extremely hands-on and informative with Nari and Yoshie providing invaluable advice along the way on any of our questions and curiosities.

All in a day’s work.

The end result was gorgeous and there is a great sense of fulfillment as you slice through the various hand-made rolls, revealing the technicolour of the fillings in their full glory. Also included in the package is the Sushi-Making certificate Narihito himself never got and a starter kit consisting of a rolling mat, rice, rice vinegar and seaweed. A word of warning – you will make a lot of sushi (and I do mean a lot – 2 bucket loads to be precise). So be sure to get some people over and make a night out of it.