Snugged underneath the Victorian arched cellars of the Ampersand Hotel, the newly launched Apero is a breath of fresh air for an otherwise mediocre and often overpriced South Kensington dining scene. There’s no sterile hotel restaurant feel here at all. Bare-brick walls, rustic lighting and turquoise leather upholstery evoke an underground, speakeasy feel, as does the smooth playlist of jazz greats cooing in the background.

Apero at the Ampersand Hotel

Head chef Chris Golding serves up a contemporary taste of the Mediterranean on small-plate dishes designed for sharing. The ingredients are fresh and seasonal with a good mix of both classics as well as more imaginative combinations. With most small plates priced under £5 and larger plates around £10, the a la Carte menu is surprisingly good value, especially by SW7 standards. Alternatively, you can book yourselves onto their 5-course grazing menu as we did – a selection of Apero’s signature dishes for the table to share (£26 / person, available for booking through Lime and Tonic‘s website).

Before we get started on the food though, the ultra-chic and very reasonably priced cocktails here (most start at £7.50) are worthy of a mention. As would be expected of a place that’s taken it’s name from the aperitif itself, the cocktail list oozes with intrigue and originality, all inspired by the greatest artists pieces of the nearby V&A museum. Our ‘Inigo J’, a Sipsmith gin, spiced sugar and berry-based infusion was expertly made and an absolute delight, as was the watermelon and tequila based ‘Zingara’.

…a cocktail list inspired by greats from the V&A museum

A generous blob of milky Burrata served with fresh figs and mint got the meal off to a good start. When the ingredients are this fresh and this great, a simple drizzle of extra virgin olive oil was all that was needed for the dish to shine. The only gripe we had was with the crisp sheets of baked flatbread that were served alongside. Far too salty from an over-sprinking of sea salt, we found ourselves having to dust off some of the excess to avoid overshadowing the otherwise delicious and creamy Burrata cheese. 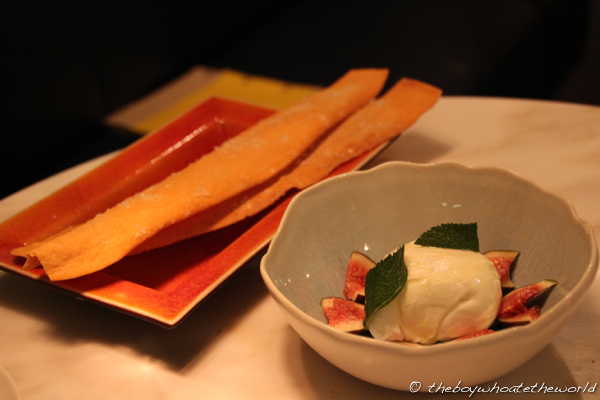 Next up, beetroot risotto with pan-fried stone bass – undoubtedly the star of the evening. We spent a minute literally hypnotized by the dish, just admiring the gorgeous deep red and purple hue. The risotto rice was cooked to a clinical al dente and the sweetness of the beets were wonderfully balanced by the creamy savouriness of parmesan. Fillets of stone-bass, spiked with a tangy pepper of some sort (Szechuan perhaps?) were also pan-fried to crispy perfection. A stunning dish on the whole that I would happily return to have over and over again.

The following dish, grilled pork chop and chicory was some proper comfort food. Marinated in fennel seed and thyme with a subtle orange-flavoured jus, the pork was tender, sumptuous and served with complimentary sides of creamy mash and red cabbage. What really set the dish apart though was the caramelised chicory on top – the bittersweet flavours complemented the meat beautifully.

The last 2 courses, a cheese plate and a white chocolate mousse, were served together. I’m not usually a fan of blue cheese, but the Gorgonzola they’ve curated here manages to stay creamy and full-bodied without being overpowering (or overly smelly thankfully). Served classically with braised pears, quince jelly and some homemade crackers, it was the better of the 2 desserts courses by far and could probably convert even the most anti of blue cheese despisers out there. White chocolate mousse topped with pecans, clementines and some sort of spongy bread pudding on the other hand was rather mediocre and forgettable.

Service from the front of house team though friendly was a little over-attentive at times. We were repeatedly asked by one of the waitresses while we were in the midst of tucking into our food ‘Are you okay? Everything ok?‘. Multiply that by 5 courses and it starts to border on annoying. I guess given they are still in their first couple months of operation, there’s an element of being eager to please. But the smiles on our faces and clean plates when we finished each course should really have spoken for themselves.

On the whole, the quality of the food, well-executed cocktails and chic-speakeasy feel of Apero means a visit here won’t be in vain. You may also be pleasantly surprised with your bill at the end of it all – a bargain by South Ken’s standards and a worthy pit-stop for anyone on the V&A museum trail.

← The Wapping Project: dine in a whopper of a power station
Mugaritz: not quite that meal of a lifetime →